For info on First Line Fridays and past posts click here.

This week’s first line comes from a book that I have been seriously anticipating since I completed book 1 about a year ago. I was so excited when I read the first book to get lost in such a wonderful fantasy and it gave me such a great distraction from things that were going on around me with job problems and other issues going on at that particular time in my life. Funny, some of those things are ONCE AGAIN an issue and I sure hope that the next book in the series can give me that break from various stresses. Or it will give me stress…who knows.

Anyone as excited as I am about this book? Any good first lines to share today?

How to Say Goodbye in Robot by Natalie Standiford 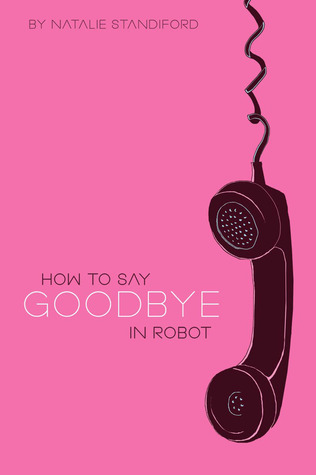 New to town, Beatrice is expecting her new best friend to be one of the girls she meets on the first day. But instead, the alphabet conspires to seat her next to Jonah, aka Ghost Boy, a quiet loner who hasn’t made a new friend since third grade. Something about him, though, gets to Bea, and soon they form an unexpected friendship. It’s not romance, exactly – but it’s definitely love. Still, Bea can’t quite dispel Jonah’s gloom and doom – and as she finds out his family history, she understands why. Can Bea help Jonah? Or is he destined to vanish?

This book took me by surprise. I wasn’t sure what to expect based on just the title alone. But man, it shocked me…in a great way.

1. This is not a romance book. I think the synopsis can be a bit misleading, or that is what I was thinking. I read it based on some awesome reviews, but I was fully intending this ridiculous romance. Instead of romance this story is about friendship, a deep friendship that we don’t get to experience that often with that many people. It’s a type of friendship we yearn for. I loved that this book handled it. It just made it all more believable. This book had me reflecting on friendships in my life, past and present, and how they had an influence on my life.

2.The characters had messy lives, but in a way that is a bit relatable. It’s not about this kids with all these problems that we just sit there and think “ok…is there anything left to go wrong for them?” Their lives aren’t perfect, but neither are ours.  There was that amount of what we perceive as normal as well as things that we label as messy. I loved that.

3. This book just flowed. I finished it real fast and I didn’t even realize it. It seemed to just flow from one thing to another and I was shocked to find I was nearing the end. I love when that happens.

Sixteen years ago the Kingdom of Winter was conquered and its citizens enslaved, leaving them without magic or a monarch. Now, the Winterians’ only hope for freedom is the eight survivors who managed to escape, and who have been waiting for the opportunity to steal back Winter’s magic and rebuild the kingdom ever since. Orphaned as an infant during Winter’s defeat, Meira has lived her whole life as a refugee, raised by the Winterians’ general, Sir. Training to be a warrior—and desperately in love with her best friend, and future king, Mather — she would do anything to help her kingdom rise to power again. So when scouts discover the location of the ancient locket that can restore Winter’s magic, Meira decides to go after it herself. Finally, she’s scaling towers, fighting enemy soldiers, and serving her kingdom just as she’s always dreamed she would. But the mission doesn’t go as planned, and Meira soon finds herself thrust into a world of evil magic and dangerous politics – and ultimately comes to realize that her destiny is not, never has been, her own.

I just finished this book last night! And oh my gosh, I loved it. I cannot wait for the next book in the series. It was action packed and awesome.

Here are my takeaways:

1. This is definitely a story about growth. In the beginning of the story the main character, Meira, is a little obnoxious. I have to give her the benefit of the doubt though. She is from a kingdom that is nearing extinction and she is trying to save it with a group of people that is slowly dwindling. She doesn’t know her parents. I can’t even imagine how hard not knowing who your parents are at the age of 16 (losing one at 13 is hard enough). Throughout the story Meira really comes into her own. She experiences a lot of self discovery and by the end of the book I was so impressed with her. I loved watching a female character grow into this strong person. It was great.

2. The story itself was super interesting. I know it’s a concept that has probably done before in multiple ways, but this had its own sense of originality as well. I love the world the author created. It was pretty easy for me to follow around and understand (I actually used the map in the front of the book and it made sense guys!). I could just picture it all. And the characters were great too! She really created characters that I felt emotionally tied too. They were relatable and the complexities of the characters weren’t so ridiculous that I was rolling my eyes. It all made sense. I cared for these characters.

3. The love triangle didn’t make me want to punch someone. Of course there was a love triangle. Did you doubt? But this one didn’t take over the entire book. She didn’t sit around pining for one guy or the other, and her reasons for liking both and not being sure TOTALLY made sense. And so much of her feelings towards the two were friendship with a side of butterflies. And I don’t know who to choose. I liked both of them. There were instances where I was like “PSH forget that guy, I pick the other one!” and then that guy I was leaving in the dust would do something awesome.  I think the author did the PERFECTLY!

And that’s all I have for today. Have you read these? What did you think? Or would you read these books? I honestly didn’t think I would read How To Say Goodbye in Robot, but I am so glad I did.

Ok, that is all. I’m off to dance around my apartment!